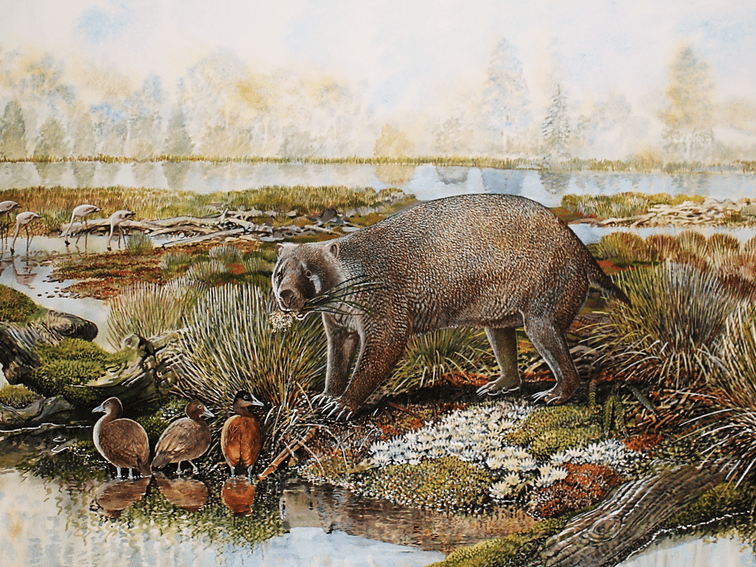 There’s a lot to love about wombats. They’re sturdy creatures, surprisingly fast runners for their size and, believe it or not, they poop in cubes. Literal cubes. But that’s not all that’s interesting about them — they also have a vast history.

In a new study, published Thursday in the journal Scientific Reports, a team of international palaeontologists detail their discovery of a partial animal skull, more than four times the size of any living wombats today.

The fossil, originally unearthed in 1973 in Lake Pinpa — a remote, dry salt lake in South Australia — has since been attributed to an ancestor of the common wombat from the Oligocene era, though different enough in characteristics that it’s earned its own marsupial family classification.

Mike Archer, a professor for UNSW Science and co-author of the paper, said in a press release that due to the animal’s encasement in clay, they were unsure what it was when they first examined it.

“We found it by probing the dry flat surface of the Lake with a thin metal pole, like acupuncturing the skin of Mother Earth. We only excavated downwards into the clay if the pole contacted something hard below the surface — and in this case it turned out to be the articulated skeleton of a most mysterious new creature.”

Dubbed Mukupirna, which means “big bones” in the Dieri and Malyangapa languages spoken by Indigenous Australians, the skeleton’s remains indicate the animal would’ve been roughly the size of a bear, with teeth that suggest a plant-based diet and powerful limbs for digging. The study’s authors suggest, however, that it may not have been the burrowing type, like contemporary wombats.

According to Robin Beck, co-author on the paper, “Mukupirna clearly was an impressive, powerful beast, at least three times larger than modern wombats.”

“Koalas and wombats are amazing animals,” he said, “but animals like Mukupirna show that their extinct relatives were even more extraordinary and many of them were giants.”