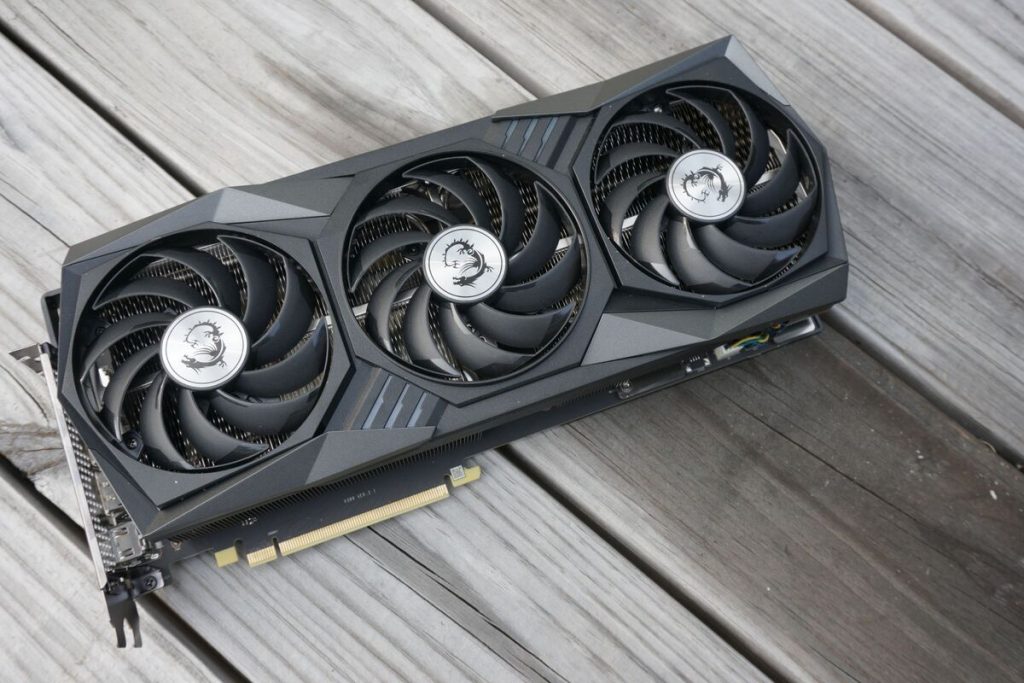 The GeForce RTX 3080 hits the streets today. Fueled by Nvidia’s next-gen Ampere GPU architecture, it wields enough power to trample its predecessor, the GeForce RTX 2080, by up to 80 percent. Nvidia’s GeForce RTX 3080 Founders Edition showed just how dominant this new GPU is—and how much juice it requires to push that many pixels. The spectacular Founders Edition deploys a new 12-pin connector and unique “flow-through” cooler design to tame the beastly RTX 3080.

But Nvidia’s $699 Founders Edition isn’t the only RTX 3080 in stores today. In an unusual move, a wide range of customized graphics cards by Nvidia partners will also be available on day one, including the $750 MSI GeForce RTX 3080 Gaming X Trio 10G on our test bench today. Where Nvidia turned to technical tricks with its Founders Edition, MSI cranks its overpowering card to 11. The MSI GeForce RTX 3080 Gaming X Trio 10G overclocks the GPU to 1800MHz, feeds it with a trio of 8-pin connectors, then cools it down with a massive three-slot, triple fan cooler loaded with new technologies and yes, RGB lights. It dwarfs Nvidia’s offering.

Does heavy metal push the custom card past the impressive precedent set by Nvidia’s Founders Edition? Let’s dig in.

We won’t spend too much time talking about the MSI GeForce RTX 3080 Gaming X Trio 10G’s underlying specifications, as they’re largely identical to those of the Nvidia Founders Edition. The special sauce in its custom design. Read our exhaustive GeForce RTX 3080 Founders Edition review for a deeper dive into what’s new in the next-gen Ampere GPU. You can also find more info about how the RTX 3080 stacks up against the previous generation in our GeForce RTX 30-series vs. RTX 20-series spec comparison.

Here’s a high-level look at what’s inside the MSI GeForce RTX 3080 Gaming X Trio 10G, followed by some discussion on what’s unique to this particular card:

The only major difference at the GPU level is the clock speed, and even that is minor. The MSI GeForce RTX 3080 Gaming X Trio 10G comes overclocked at 1,800MHz boost speeds, a mild bump from the RTX 3080’s stock 1,710MHz specification. The 10GB of cutting-edge GDDR6X memory comes clocked at reference speeds, but those are ultra-fast. The name of this card is interesting though: by slapping “10G” onto the end, MSI’s branding might be lending credence to rumors of a 20GB RTX 3080 waiting in the wings.

Another significant change comes in power delivery. Nvidia’s RTX 3080 FE needs a pair of 8-pin power connectors, which then slip into an adapter for the company’s proprietary 12-pin adapter. That leaves the Founders Edition card with scant leeway for its 320-watt total board power rating–the two 8-pin connectors can draw 150W, while the PCIe 4.0 slot itself supplies another 75W. MSI built more power overhead into the Gaming X Trio, outfitting it with a trio of standard 8-pin connections.

Unfortunately—and oddly—MSI’s card doesn’t let overclockers push as hard as Nvidia’s card at a software level. While the Founders Edition lets you increase its power limit by 15 percent in overclocking software (like MSI’s awesome Afterburner, which is being updated to support the RTX 30-series), the Gaming X Trio only lets you crank the knob up an extra five percent. We haven’t had much time to tinker with overclocking yet, as we focus on out-of-the-box performance at PCWorld. With the older RTX 20-series GPUs those power limits had a much bigger effect on overclocking performance than simply upping clock speeds.

But the MSI GeForce RTX 3080 Gaming X Trio 10G’s biggest differences lay in its design. Where Nvidia used a funky short PCB with a unique cooling solution, MSI sticks to a traditional board layout for its custom PCB. It’s just really big, unlike the Founders Edition’s standard two-slot design.

Seriously: It’s hard to overstate how massive this card is. The Gaming X Trio is roughly 13 inches long, three slots thick, and so wide that I can’t screw its bracket into the case by hand—my fingers can’t reach. Instead, I had to secure the card using a thin screwdriver. It’s so hefty, MSI includes a metal support bracket in the box that you can screw in underneath the Gaming X Trio to help hold it up.

MSI also devoted a lot of engineering attention to reinforcing the Gaming X Trio’s structure. It built a “rigid metal anti-bending strap” into the half of the card that holds the GPU itself, solely to help everything stay strong. Likewise, the full-length backplate is made from graphene composite rather than traditional plastic or metal. MSI’s press material touts graphene as being 100 times stronger than steel, and says the backplate is 4 times stronger than a plastic backplate, while also being 20 times better at heat dissipation.

All that reinforcement holds up an impressive cooling solution, which MSI dubs “Tri Frozr 2.” The MSI GeForce RTX 3080 Gaming X Trio 10G embeds a trio of swooping Torx 4.0 axial fans in its (plastic) shroud. MSI claims the redesigned blades generate 20 percent more air pressure than the last-gen Torx 3.0 fans at the same 35-decibel noise level. Better yet, they shut off completely when not under load, so the card remains silent while you’re browsing your desktop.

Those fans push air through a gargantuan heatsink. The fins include tiny “deflectors” designed to add yet more surface area for cooling, as well as guide the incoming air in specific directions. Rather than sticking to hard edges for the fins, MSI equipped the Gaming X Trio with “Wave-curved 2.0” fins, which helps to reduce noise levels, the company says. It’s got not one, not two, but five heatpipes snaking throughout, as well.

That’s not all. The MSI Gaming X Trio features precision-machined core pipes over the GPU itself to maximize the contact between the RTX 3080 chip and its heatsink. The company also uses “an abundance of thermal pads” over the board’s components, and created the PCB with 2 ounces of thickened copper to help with heat dissipation and reliability. MSI took steps to protect against the higher power demands of the RTX 3080 as well, building additional fuses into the PCB.

Sure, that’s a lot of marketing lingo, but here in the real world, all that stuff works. The MSI GeForce RTX 3080 Gaming X Trio 10G stays cooler than Nvidia’s Founders Edition under load, and while you might see this gigantic graphics card in your case, I never once heard its fans over my CPU liquid-cooler or case fans, even when stressed to the max.

Speaking of seeing the card, the Gaming X Trio includes a thin RGB light strip on the edge of the card, accent lights in the shroud, and the MSI logo on the side of the card also illuminates. You can tweak them using MSI’s “Mystic Light” RGB controls via the company’s Dragon Center control app.

MSI is also upgrading its fantastic Afterburner overclocking and GPU monitoring app to support the RTX 30-series. This includes the “OC Scanner” tool, which scans your graphics card across a variety of voltages to apply an automatic overclock tailored to your specific GPU’s capabilities. I was able to play with the upgraded version of Afterburner a little bit before this embargo lift. While the OC Scanner worked as advertised, the real-world results weren’t game-changing.

The automatic overclocking adds only 42MHz to the card’s core clock speeds, and 200MHz to its memory clock speeds. In practice, the performance uplift was negligible, adding about three frames per second to gaming performance results at 4K resolution. Not three percent; three frames. Nvidia’s automatic overclocking API is known for staying conservative, so you might be able to squeeze more juice out of the card manually. Still, it’s not an auspicious start for people hoping Ampere will let you push overclocks to blistering new levels. The lack of a dual-BIOS switch may also irk overclockers.

Fortunately, the RTX 3080 is incredibly fast as-is. Onto the benchmarks.