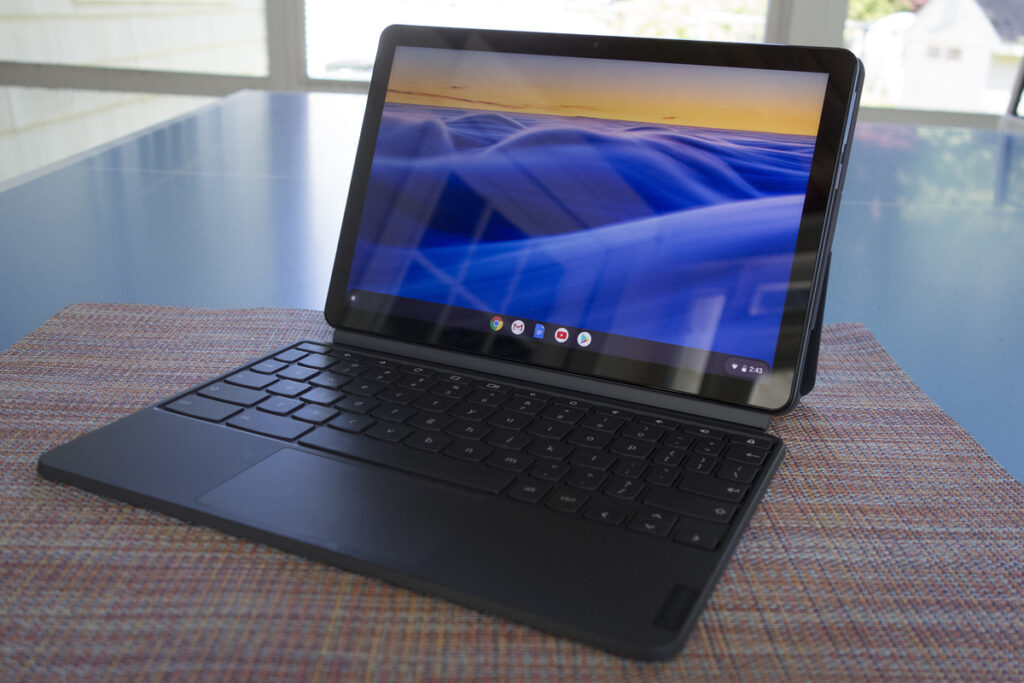 The Lenovo Chromebook Duet is one of the only Chromebooks I’ve ever used that knows what it is. Much like Apple’s iPad or Microsoft’s Surface, the Duet’s identity is in its detachable versatility. It embraces its role wholeheartedly, with a lightweight design, bright WUXGA display, and funky magnetic keyboard case that combine into an impressively portable and stylish package.

It’s as easy on the wallet as it is on the eyes. The Duet costs just $299 at Best Buy for 128GB of storage—and that’s with a detachable keyboard. But you don’t need to be in the market for a cheap Chromebook to want one. The Duet’s quirky personality more than makes up for its pokey processor, so while it might not stand up to even a middling Chromebook like the Pixelbook Go in speed tests, the Duet will absolutely stand out in the crowd.

Good looks in a small package

If I didn’t know better, I would have guessed the Duet was designed by Google. The back has a two-tone blue-and-gray design like the Pixel phones, the front has uniform bezels like the Pixel Slate, and the keyboard cover has a knit exterior like the Pixel fabric case. Basically, the Duet combines the best elements of Google’s products into a very nice-looking tablet. The camera is a little bumpier than I’d like, but it’s no worse than that on any other tablet.

But even with a somewhat derivative design, Lenovo has put some thought into the details. The power button and volume rocker are perfectly split by the color line to create come nice symmetry, the speakers are on the top so as not to be muffled by the keyboard, and the sole USB-C port is on the bottom to keep the cord from getting tangled. That’s also where you’ll be plugging in earbuds, because the Duet doesn’t have a headphone jack. It’s the only real knock I can levy on the design, and even so, it’s a small one because Lenovo includes a 3.5mm-to-USB-C adapter in the box.

On its own, the Duet weighs just a pound, less than the 9.7-inch iPad. Its 6.29 x 9.44-inch frame is extremely easy to hold with one hand, and the 10.1-inch screen strikes a nice balance between too big and too small. The bezels around the screen are uniform and relatively skinny, so the focus is entirely on the screen.

And what a screen it is. While most Chromebooks in this price range have 720p displays, the Duet has a better-than-full-HD WUXGA 1900×1200 resolution that’s both bright and crisp. Max brightness topped 500 nits and while it’s a tad uneven in spots, it’s one of the better displays I’ve seen on a Chromebook at any price range. It even holds up compared to the Pixel Slate’s marvelous 2000×3000 Molecular Display. For $300 you’re not going to find a better display—unless you get an iPad on sale.

A stand-up accessory brings it all together

With a fantastic display and lightweight design, the Duet would be an excellent tablet running any OS, but it’s a particularly good showcase for Chrome’s tablet mode enhancements. With version 81, Google introduced Android-inspired gestures for navigation. They’re right at home on a tablet this small. It feels a lot like using a big phone, with intuitive back and home gestures that make the UI smart and animated.

But the Duet has another trick up its sleeve: it can turn into a tiny laptop. And it won’t cost you anything. While the iPad, Surface, and Pixel Slate all charge hundreds of dollars extra for their add-on keyboards, Lenovo includes its detachable keyboard in the box, turning a good value into a great one.

Like most tablet keyboards, the Duet’s is magnetic, attaching via a set of pogo pins and a series of magnets on the back. The difference here is that it’s split into two parts, with the back acting as a sort of protector when the keyboard isn’t in use. Both pieces attach firmly and work well together, but they’re more intriguing as separate pieces. The Surface-style kickstand that’s built into the rear case offers good adjustability, but it requires two hands to pull out–and even then it’s still a little tricky. (I often pulled the case off the back when trying to pull out the kickstand.) Even so, I found myself often leaving the back plate on even when using the Duet as a tablet, both for the kickstand functionality and the texture it provided.

That’s a good thing, because the keyboard isn’t the Duet’s strongest quality. While the keys have a nice travel, typing on it is a little cramped due to the small size—and some of the keys, including the comma and apostrophe, are half-sized, which makes them harder to hit. The keyboard also more than doubles the weight of the Duet when attached, despite the small size. Closing the keyboard on the screen turns off the screen, but because there’s no magnetic closure on the keyboard side, it’ll slip, slide, and flop open while carrying the Duet inside a bag.

If it were a $100 add-on, the Duet keyboard might not be worth buying, but as a bundled accessory, it’s a fantastic addition to an already great tablet. Lenovo was smart to split the keyboard case in two, because even if you opt for a full-sized Bluetooth keyboard for your typing needs, the Duet’s keyboard cover will be very nice to have when you need to bang out a long email or prop it up to watch a movie.

If you’re looking for a Chromebook with power, the Duet is not for you. Its MediaTek Helio P60T was slow back when it launched in 2018, and a bare-minimum 4GB of RAM means you won’t be keeping dozens of tabs open. It’s noticeably slower than a Core i5-based Chromebook like the Pixel Slate or Pixelbook Go, but for the most part it’ll get through tasks with ease.

Your mileage will vary depending on what you want to do with it, of course, but for the most part, the Duet will perform about as well as an Intel Celeron or OP1 processor. That is to say, plenty good enough. While you can plainly see that the Duet brings up the rear compared to other recent Chromebooks in our baseline CrXPRT 2 Performance benchmark, in day-to-day use it didn’t feel nearly as sluggish as the bar chart would have you believe.

The same can be said for the Basemark 3.0 benchmark, which measures browser performance and the responsiveness of web applications, two very important things on a Chromebook. Again, the Duet brings up the rear when compared even to a low-power Celeron-based Chromebook, but it’s not as bad as the chart would have you believe. Yes, sites load a bit slower and videos take a beat longer to start playing, but it was very bearable in my testing. Chrome doesn’t tend to get bogged down over time like other systems, so the performance should be fine for the things most people want to do.

Battery life, however, is another story, a very good story with a happy ending. Lenovo rates the Duet as having 10 hours of battery life, but in my testing I got way more than that. Benchmarks yielded an insane 15-plus hours. I easily got through multiple days in regular use. It’s somewhat akin to the iPad in that I never had to worry about battery life. Standby life is fantastic, and it didn’t seem to lose significant battery life doing any single task, even with the keyboard attached.

For my money, I’d much rather have better battery life than the fastest processor in a Chromebook anyway, and the Duet more than delivers where it counts. It will get through a day with enough power, plenty of juice, and very little fuss.

Should you buy a Lenovo ChromeBook Duet?

During a time when kids are being schooled at home, parents are turning to Netflix for escape, and no one wants to spend a bundle of cash on anything, the Duet hits every high note. But even if we weren’t shrouded in the financial and social uncertainty of a pandemic, the Duet would be the perfect Chromebook for most people.

The screen might be a little small and the keyboard a little cramped if you’re working for hours on end, but otherwise it’s a great little machine, whether you use it as a companion to a larger laptop, give it to a kid who needs to take a Chromebook to school, or set it up as a portable streaming device. Even if you never use the keyboard for anything other than a stand, the Duet is a fantastic bargain that sets the bar very high for all future Chromebook tablets.