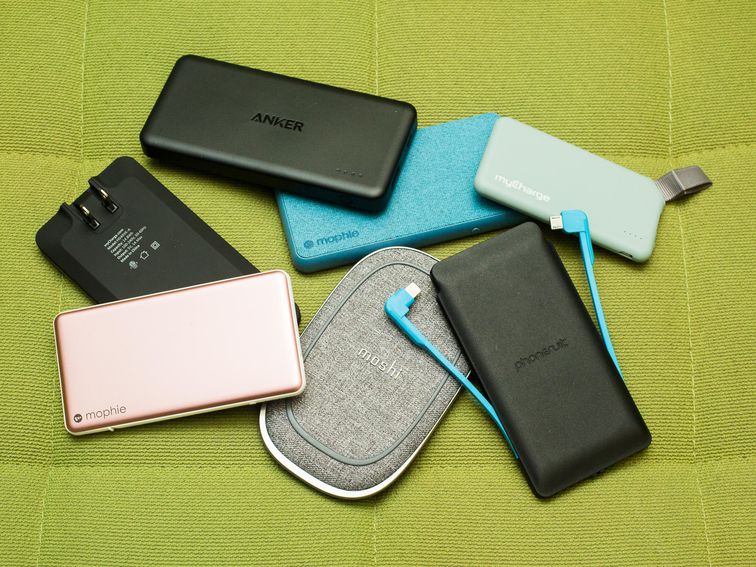 Manufacturers like Apple seem to love to create phones in ever-increasing sizes, so a portable battery charger or power bank might be a more practical purchase for iPhones than battery cases, which tend to make a phone extra heavy and bulky to carry around.

To that end, I’ve rounded up the best portable power banks and battery chargers for iPhone out there. Although they cost more, I personally like batteries that have a Lightning cable built into them, so I don’t have to worry about carrying around a charging cable for fast charging. But I’ve also included some budget charge picks for those who want to spend as little on charging their iPhone as possible. And, while we have a similar list of best power banks for Android phones, anything here without an integrated Lightning cable will work perfectly well when charging an Android smartphone (or any other portable gadget), so long as you provide a USB-C- or Micro-USB-compatible cable.

Subscribe to the Mobile newsletter, receive notifications and see related stories on CNET.

Mophie’s PowerStation Plus has a fabric finish and houses a 6,040-mAh battery, as well as an integrated Lightning connector. If you buy one of the Apple-exclusive versions, the battery conveniently charges an iPhone and iPad with any Lightning cable (rather than Micro-USB), but you have to pay the full list price of $80. The version on Amazon charges via an included Micro-USB/Lightning cable and is currently discounted to a little more than $50. With the USB-out port, you can charge or recharge two devices at once.

Note: Ignore Amazon’s product description that says the smaller PowerStation Plus has Qi wireless charging — it’s not a wireless charger.

You can pick up the RavPower 10,000mAh Power Bank for around $17. There’s nothing fancy about this power bank, but it’s slim for a 10,000-mAh power bank, has two USB-A outputs and is dirt cheap.

The Anker PowerCore Slim 10,000 mAh costs about $25. While it’s thicker than some of the portable chargers in this roundup, it is one of slimmest 10,000-mAh portable chargers and has a USB-C input for charging the battery, but no USB-C output. No cables are included.

MyCharge HubPlus Turbo is the company’s latest power bank with integrated foldable wall plug and both Lightning and USB-C cables. The wall charger is called the Turbo because it has Power Delivery and Quick Charge 3.0 (USB-C cable) that deliver fast charging speeds (up to 75% faster charging time than the standard 5V charger that comes with most iPhones). This wall charger has a 6,700-mAh battery.

The Ventev Powercell 6010 Plus power bank (currently $51 on Amazon) has integrated folding prongs and both an integrated Lightning cable and Micro-USB cable. The Ventev houses a 6,000-mAh output battery. There’s also a USB-out on the wall charger so you can charge or recharge another power bank with an extra cable.

This Anker model is basically an oversized wall charger that plugs in like a power adapter with a built-in 5,000-mAh output battery. The wall charger has got two standard USB charging ports for charging up multiple devices such as your phone and a secondary device (or two phones) simultaneously, and a little LED indicator on the side lets you check the charge level at the press of a button. The wall charger is available in white, black or lipstick red for $30 to $36.

The Atom XS comes in two versions: a smaller 800-mAh output model and larger 1,300-mAh output model. These are designed to fit on a keychain and are about the size of an electronic car key. But be warned, they won’t fully charge your phone. The idea is to have them around for charging in case your phone dies and you need a spot of juice to get you through a few hours.

Both Atom XS models have an integrated Lightning connector and won’t weigh your phone down while charging. At around $40 for the larger 1300-mAh output variant (the one I’d opt for), the Atom XS is fairly expensive and you may be disappointed that it will only charge some of the larger iPhones to about 25%. But again, this all about the convenience of having a tiny battery charger for emergency charging purposes. A model with USB-C charging is slightly cheaper at $35.

Available in a variety of capacities, MyCharge’s Adventure series battery packs are designed to withstand drops and offer both dust and water resistance. They also include a carabiner so you can clip the battery onto a backpack.

Priced at around $27, the Adventure Mini pictured here houses a 3,350-mAh output battery that will fully charge most phones. It has one USB-out port (no charging cable is included) while the step-up Adventure Plus has dual USB-out ports to charge or recharge two phones at the same time. That’s a lot of ports.

MyCharge’s Unplugged series comes in 3K (3,000 mAh output), 5K (5,000 mAh output), 8K (8,000 mAh output) and 10K (10,000 mAh output) models, all of which are portable battery packs with wireless charging capabilities. Additionally, they have a USB-out port or ports for wired charging with a cable (you can charge two devices simultaneously). It’s like having a charging pad without the cord.

Moshi’s 5,000-mAh output Porto Q 5K isn’t cheap at around $85, but like the MyCharge Unplugged, it’s a portable battery that doubles as a wireless charging pad. It’s swankier and more stylish than the MyCharge Unplugged and charges via USB-C instead of Micro-USB. There’s a USB-out port for wired fast charging, and you can charge two devices at once.

The Belkin Boost Charge comes in 5,000- ($21) and 10,000-mAh ($42) versions. The higher capacity model (pictured above, left) is a very slim 10K power bank, weighing 7.48 ounces (212 grams). While neither comes with a Lightning cable, one of the Boost Charge’s key differentiating points is that you can charge or recharge with a Lightning cable so you don’t have to carry around a Micro-USB or USB-C cable to charge it.

The 5K version (pictured above, right) has one USB port for charging. The 10K has two USB out ports for charging two devices at the same time.

What to look for

Here are a few things to keep in mind when shopping for a battery pack or power bank: