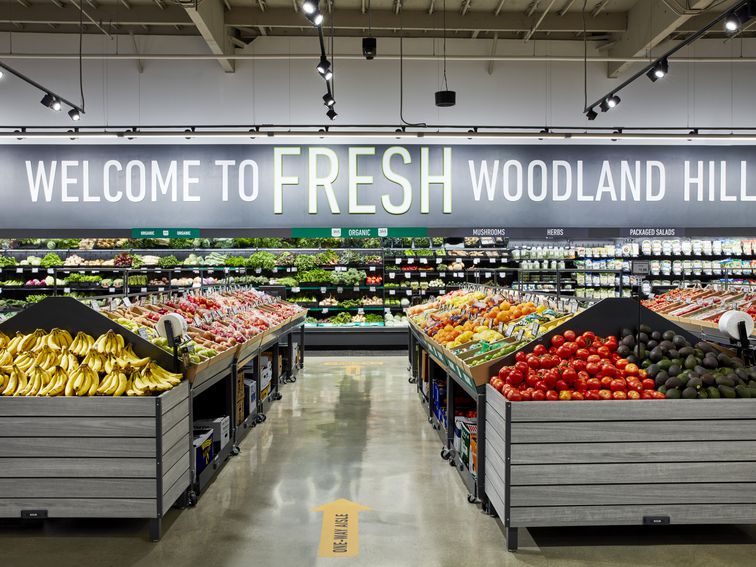 If you haven’t noticed, Amazon really wants you to buy more groceries from its stores. It’s already introduced a bunch of new store formats and services to entice food shoppers, and the company has now come out with another one. It’s called Amazon Fresh, essentially a traditional supermarket but with a few Amazon-centric touches like Alexa as a shopping assistant and high-tech grocery carts.

The online retailing giant said it’s opening its first Amazon Fresh location, in Woodland Hills, California, on Thursday, but on an invite-only basis. It plans to let in the general public after a few weeks. The company first unveiled plans for the store last November but hadn’t publicly confirmed its name until Thursday. It’s now developing five more locations in the Los Angeles and Chicago areas.

The store will have Amazon’s stamp on it in a few noticeable ways. It’ll debut the Dash Cart, which uses weight sensors and cameras that scan your items as you’re placing them in the cart, so you can skip the checkout line. The store will include regular checkout lanes too.

“I would use it all the time if I lived in the area, it just makes things easier,” Jeff Helbling, vice president of Amazon’s grocery stores business, said about the new cart.

Built-in Echo Show devices will be available for people to ask Alexa where certain items are located (no, they won’t play your favorite song too). Plus, there’ll be a service counter for people to pick up orders from Amazon.com, and they can also complete returns there without having to package their items in boxes.

Amazon Fresh, a 35,000-square-foot store, is part of the e-retailer’s growing array of grocery offerings, both digital and in the physical world, that the company is hoping to use to expand in the over $1 trillion US grocery market. Doing that will help Amazon keep up its revenue growth, build loyalty with weekly food shoppers and increase its footprint in one of the few areas of retail where it’s a tiny player. As a bonus, this work will help Amazon compete against Walmart, by far the biggest grocer in the US, which is fast encroaching on Amazon’s turf of e-commerce.

Amazon isn’t placing all those responsibilities on just one store in California. It bought Whole Foods in 2017 for $13.2 billion, and that chain now has over 500 stores. In February, Amazon opened Amazon Go Grocery, a much smaller, 7,700-square-foot grocery store that uses its checkout-free technology. It also runs two Amazon Fresh Pickup grocery pickup locations and operates two dozen Amazon Go convenience stores. The company offers a handful of online grocery delivery services, including the Amazon Fresh online service and its Prime Now rapid-delivery program.

Amazon is still a much smaller grocery operator than Walmart or Kroger, but analysts expect it to grow quickly, and Amazon Fresh may certainly help with that.

Helbling said he expects Amazon Fresh and Whole Foods to complement each other, with Whole Foods offering a higher-end experience with more specialty products, while Amazon Fresh will be more mainstream with national brands. He said Amazon has been “quite happy” with Whole Foods’ performance and the company remains dedicated to investing in that brand.

“We see Whole Foods and Amazon Fresh operating alongside one another,” he said. “They serve fairly different niches.”

The Amazon Fresh store will include fresh produce and prepared foods like pizza, hot sandwiches and fresh baked breads. It will also stock the Whole Foods 365 private label brand, along with its new Amazon brands called Fresh for food and Cursive for wines.

There won’t be Amazon Prime member discounts in the store, with Helbling saying the location will instead offer free same-day deliveries and pickup for Prime customers, and it’s offering regular low prices on items like Quaker Oatmeal and whole chickens.

The store will model its coronavirus safety protocols after Whole Foods, requiring daily temperature checks for workers and masks for all customers and employees. The Woodland Hills location will also operate at 50% capacity.

Though Amazon won’t be letting as many customers into its Amazon Fresh stores, it’s already using several of them as distribution centers for online orders. It’s been using Woodland Hills for online orders for the past few months.

Other than the techie additions, the store, judging from pictures provided by Amazon, looks like a traditional supermarket. Helbling said he’s confident his company has done enough to entice customers to break from their regular grocer and switch, saying Amazon has focused on the important factors of price, convenience and food selection.

“We think we do quite well in all of those,” he said, adding that bonuses like the Dash Cart will help.

Andrew Lipsman, a retail analyst for eMarketer, agreed with that assessment, saying plenty of regional grocers haven’t remodeled in years, so local shoppers will be drawn to a new store with a flashy name like Amazon on the front. He added that the novelty of something like the Dash Cart should also ensure the store will have lots of initial demand, especially from Amazon’s likely target audience of younger shoppers, who are open to trying a new place.

Plus, Amazon benefits even if these stores don’t make money for years, able to draw from them valuable consumer shopping data it can use for its website and advertising business, Lipsman added.

“People are pretty formed in their habits when it comes to grocery stores,” he said, “but if a new grocery chain opens in their area and it’s convenient, they’ll try it out.”