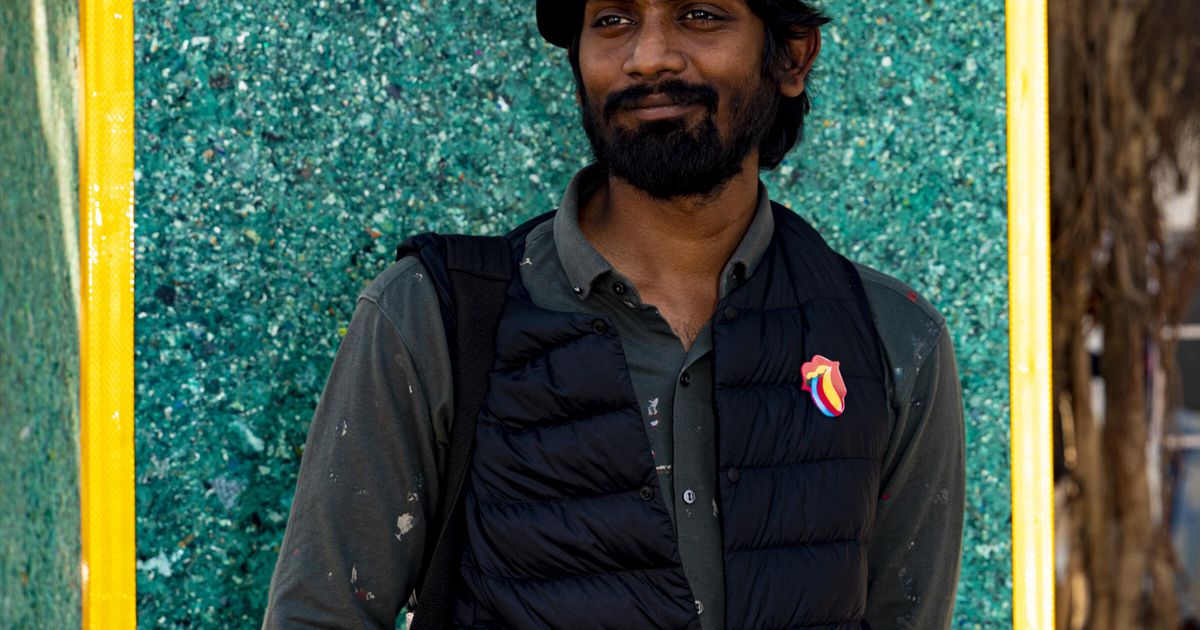 A street artist in India is searching for his toilet masterpiece

By a roadside traffic police station across from a New Delhi elevated train line, Ashwani Aggarwal walked up to one of his toilet stalls, gave the side a firm kick and offered an assessment of his work.

“It’s a little smelly, you can see,” he said before nodding. “It’s sturdy.”

One of Aggarwal’s life joys is being a secret hero of sorts on the streets of New Delhi. Public urination is a nuisance in just about every major city in India, so he’s doing what he can to stop it by building public urinals and giving them away for free to gas locations and police stations. In return, he only asks that workers there help maintain the facilities so they remain clean and usable.

He runs a small nonprofit called Basic Shit, which he uses to raise money for these projects through crowdfunding and connect with folks in the community to help him build new toilets. So far, he’s constructed five urinal stalls, each made of 9,000 recycled plastic bottles pressed into thick sheets to make the walls. He’s raised enough money during the coronavirus lockdowns to build 10 more. Aggarwal’s goal is to have 1,000 of these locations dotted all over India’s capital.

How smart toilets are saving lives in India


Aggarwal doesn’t really have to do this work; his full-time job is as an interior designer for restaurants, homes and offices. But he’s drawn to sanitation as a creative outlet. That makes him a rare kind of artist in which his medium is functional toilets, kind of like a modern-day Marcel Duchamp or bathroom Banksy. I visited him in New Delhi back in February to learn about his work and why he enjoyed building public urinals.

“It’s an essential part of the city, like the road, footpaths, subway, traffic lights,” he said “Everything is important, so toilets also.”

Aggarwal is one of many young entrepreneurs working to improve sanitation in India in hopes of making the developing country a cleaner place. They became interested in this work following the 2014 launch of Prime Minister Narendra Modi’s Swachh Bharat mission, a $30 billion project to stop open defecation and littering. New local startups working on toilet innovations include Garv Toilets, which makes durable, steel toilets infused with tech, and Ekam, which makes waterless, odorless urinals.

When we were together, Aggarwal, a 28-year-old New Delhi native, loved to laugh and was always cracking jokes. He was constantly pitching new sanitation concepts like foot pedal-operated toilet seats, a urinal made from a trumpet, and public spittoons to stop spitting on the street. He was thin, with a black beard and hair flowing out of his beret and draping over his ears. On his black puffy vest he affixed a Rolling Stones pin and he wore meticulously well-kept white, black and yellow Nike sneakers.

His family sells women’s clothing and had set him up with his own shop selling jeans and T-shirts. But he left that work and went to art school, where he focused his college thesis on sanitation. That’s how he started Basic Shit about six years ago.

India’s sanitation is broken, but there’s a plan to clean it up


He takes a low-cost approach for his urinals. The ones he doesn’t give away, he sells to NGOs for as little as 12,000 rupees, or about $160. Through his for-profit company, called LooLoo, he’s sold 60 of his designs to music festivals — some complete with a small shelf to hold your beer — for around $400 a pop.

The walls of the urinal by the police station were stippled with different shades of green. Aggarwal said he worked with trash pickers in Bombay to source the plastics he uses and is able to request certain colors, such as white, red or green. There was yellow reflective tape along the sides so it could be seen at night, and it had holes along the bottom to dissuade people from filling it with trash. The top had planters to give the whole thing a nature vibe.

“There are other people making trash sheets, but they are very ugly,” he said about the plastic material he uses. “That’s the thing we are trying to break, it should be attractive. It should be like an art piece.”

Older designs, like the one we’re looking at, are put together with metal pieces and have off-the-shelf urinals added in. His newer designs are built almost like Legos and use only this plastic material, even for the urinals. He started using this plastic — which he said has no resale value — to stop vandals from stealing metal parts.

“He said people used to piss around his shop,” Aggarwal said, translating the interview from Hindi. “Now it’s all sorted. They pee only in one direction.”