iOS 13.6, iPadOS 13.6 Released With Auto Updates Over Wi-Fi Setting: How to Download

Apple has released iOS 13.6 for iPhone users with an updated Health app that brings a “Symptoms” category. The new iOS update also includes the ability to log new symptoms such as fever, chills, and sore throat, and share them with third-party apps. iPhone users also received support for digital car keys, which was showcased at WWDC 2020 last month. The Cupertino giant has also brought iPadOS 13.6 for iPad users with a list of bug fixes and improvements. Both iOS and iPadOS updates also include Apple News-focussed changes that are limited to the US.

One of the key additions of iOS 13.6 is the updated Health app that includes the symptoms category to log symptoms such as fever, chills, sore throat or coughing. Once recorded, the symptoms can be shared with third-party apps. The update also brings Apple News+ as well as the option to listen to audio stories and read local news in the Today feed for users in the US. iOS 13.6 comes with the “Symptoms” category that is accessible through the updated Health app

Additionally, the latest iOS release includes digital car keys support that will let you use your iPhone to lock, unlock, or start your car. The feature was announced at WWDC 2020 and will be supported by some luxury car models starting next year. Moreover, it will be limited to the iPhone XR, iPhone XS, and newer models.

Aside from the new features, iOS 13.6 brings a new setting to let you enable automatic update downloads on your iPhone when it’s on a Wi-Fi network. This is an extension to the earlier Automatic Updates option that was meant to install updates overnight after downloading them in the background. Moreover, the Download iOS Updates option, which allows automatic download of iOS updates over Wi-Fi is enabled by default. The latest iOS update also addresses issues causing apps to become unresponsive when syncing data from iCloud Drive and causing data roaming to appear to be disabled on eSIM. There is also a fix for the issue that could interrupt audio on Wi-Fi Calling. The update also fixes an issue that prevented some iPhone 6s and iPhone SE users from registering for the Wi-Fi Calling service. 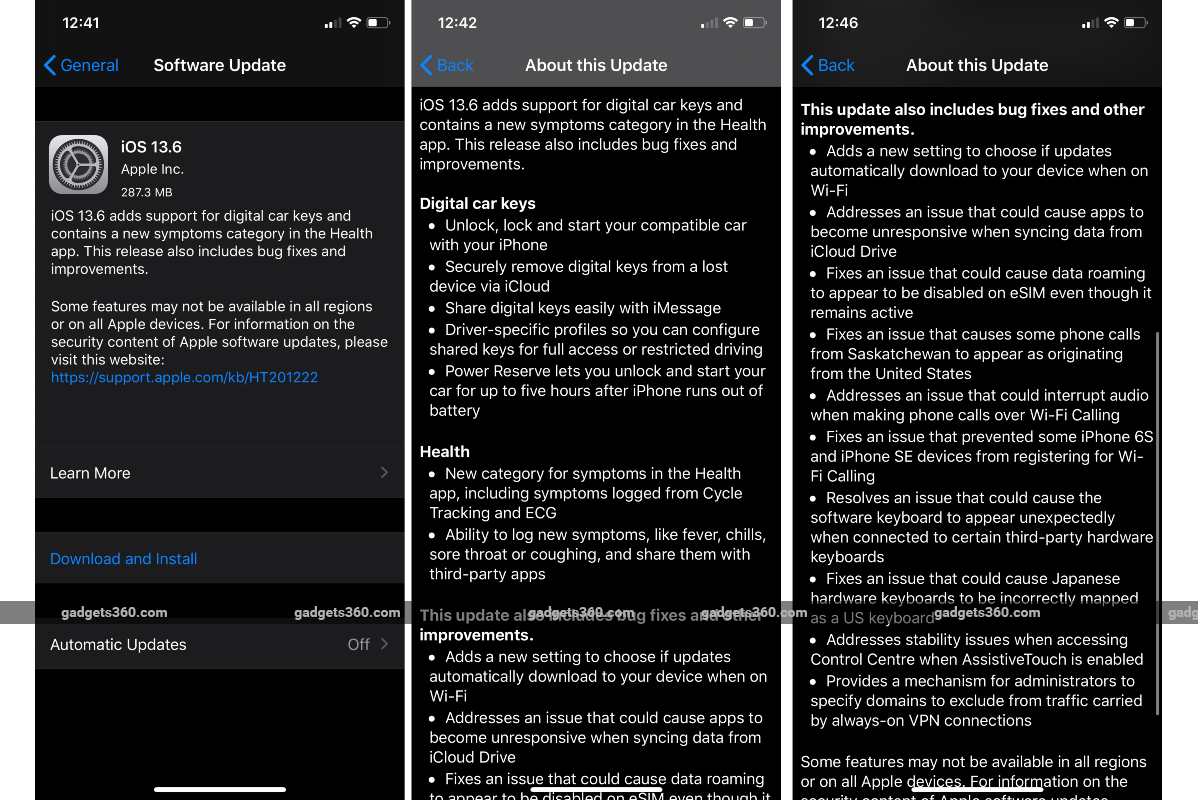 iOS 13.6 has been released with a list of new features

The update also resolves an issue that was affecting the software keyboard to appear unexpectedly when using a third-party keyboard. Further, there are fixes for stability issues that were impacting the Control Center when using Assistive Touch. The update also comes with a mechanism for administrators to exclude specific domains when using always-on VPN connections.

The iPadOS 13.6 update also brings an updated Apple News experience for US users. The update also brings the setting to enable automatic download of updates when using a Wi-Fi network. It includes a fix for the issue that could make some apps unresponsive when syncing data from iCloud Drive. There are also fixes for the Control Center and software keyboard — in line with what has been provided for iPhone users. The update also includes the mechanism to exclude specific domains when using always-on VPN connections.

You can read about all the security fixes available within iOS 13.6 and iPadOS 13.6 by visiting the Apple Support page.

You can download iOS 13.6 on your iPhone or iPod touch or iPadOS 13.6 on your iPad by going to Settings > General > Software Update. Make sure that your device has a sufficient amount of battery and is connected to a Wi-Fi network. Furthermore, the new updates are available for all iPhone, iPod touch, and iPad models that are compatible with iOS 13 or iPadOS 13.